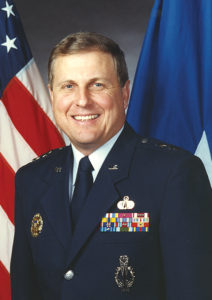 Also known as Judd, Maj. Gen. Blaisdell was born on September 15, 1949 in Clifton, Virginia. He is a descendant of Ralf Bleasdale from 1593 Hawkshead, England whose family line boasts The Blaisdell Papers—the 5th oldest family publication in the United States. In 1971, Blaisdell graduated from Syracuse University with a Bachelor of Arts in history and as a distinguished graduate of the Air Force ROTC program.

After serving as Commandant of the Armed Forces Staff College (now the Joint Forces Staff College) in Norfolk, VA, from 1998 to 2000, Blaisdell began his last assignment in the Pentagon. For four years, Maj. Gen. Blaisdell held several senior positions on the Air Staff including Director of Strategic Security and Deputy Chief of Staff for Air and Space Operations, in which he was responsible for providing policy, guidance, expertise and oversight to the Air Force nuclear, space, force protection, and homeland defense programs. Notably, during his time at the Pentagon, Blaisdell also participated in the response efforts during 9/11 and was selected by Secretary of Defense Donald Rumsfeld and Chairman of the Joint Chiefs of Staff Richard Myers to serve on the Single Integrated Operational Plan Targeting Review Committee, which would significantly alter the course of worldwide nuclear targeting requirements. Blaisdell was a firm believer in the need for space and missile defense operations. “Space assets will save lives,” he explained in a 2003 Pentagon press briefing. “It keeps [us] from putting our troops in harm’s way.”

Maj. Gen. Blaisdell retired from the Air Force in 2004, having served 33 years on active duty. Among many distinctions throughout his service, he was recipient of the Defense Distinguished Service Medal, the Air Force Distinguished Service Medal, the Defense Superior Service Medal, and the Legion of Merit. Now a private citizen and entrepreneur, Blaisdell co-founded Strativest, LLC in 2007, which provides strategic planning, financial, and human resource management consulting services.

Maj. Gen. Franklyn Blaisdell is an alumnus of Syracuse University and a veteran of the U.S. military. You should know his story.