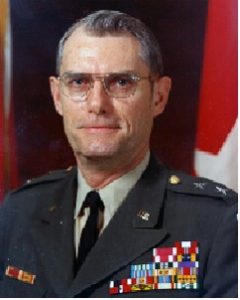 Major General Harold B. Gibson, U.S. Army retired, is an alumnus of Syracuse University, and also a military veteran. You should know his story because it’s a Syracuse University story—one that speaks to our past, our present, and our future.

Gibson was born in central Kansas in 1923 but grew up 700 miles away in Nashville, TN. After graduating high school, Gibson attended Texas A&M University, where he was a cadet in the Army Reserve Officer Training Corps (ROTC) program. Gibson graduated with his bachelors and commissioned in 1943. Upon commissioning, Gibson entered into the Army as an Engineer Officer at Fort Belvoir, Virginia. Like many young men during the 1940’s, Gibson served his country abroad, serving primarily in the Pacific Theatre of World War II. Here, he served in New Guinea, Biak Island, the Philippines, and Japan until 1946.

After World War II, Gibson was reintegrated as a Regular Army Ordnance Officer, attending the Ordnance Center and School early in his reintegration and working with the development, testing, and verification of new Ordnance materiel. Gibson began assisting in the implementation of the Marshall Plan in Europe, providing materiel to the French Army, coordinating materiel programs with the South Vietnamese, and serving as Chief of Staff of the U.S. Army Tank-Automotive Command. After World War II, Gibson also received numerous graduate degrees, including a Master’s in Business Administration from the Syracuse University School of Management in 1953. The skills that Gibson developed and refined while at SU were hugely beneficial to him. For example, the management skills he learned while an MBA student at SU were integral to his posts as Commanding Officer of the U.S. Army Support Command in Saigon and as the Commander of the U.S. Army Materiel Command in Germany during the Cold War. His success in these two positions followed him to his last post before retirement, as the Commander of the U.S. Army Theatre Army Support Command in Europe.

After his retirement from the Army in 1977, Gibson entered into the private sector, becoming a project manager and later a vice president for Frank E. Basil, Inc., a government-contracted services firm that provides materiel to the US Army. Currently, Gibson resides in Maryland.

Major General Harold B. Gibson, Jr. is an alumnus of Syracuse University, and a veteran of the U.S. military. You should know his story.