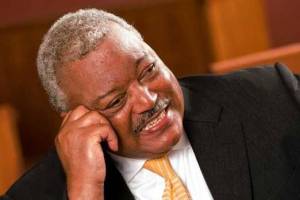 Growing up on a family farm in Jarratt, Virginia, Melvin “Mel” T. Stith was one of 10 siblings. It was on this farm he learned—through his daily chores and obligations in a large family—that “leadership is [about] being responsible for things.”

Following high school, Stith attended Norfolk State University (NSU), a historically black institution, where he majored in sociology. Since NSU was initially a land-grant school, ROTC was mandatory for all males during their first two years in college. By his junior year, however, Stith received an Army ROTC scholarship. He graduated two years later in 1968 and received his commission in the U.S. Army as a military intelligence officer.

Melvin T. Stith notably served in the U.S. Army Intelligence Command at a time in our history when there were few military officers of color. After learning Vietnamese from the Defense Language Institute (Southwest Branch) in El Paso, TX, Stith deployed to Vietnam. Stith made the rank of captain while there, but one day, while in the jungle near the Cambodian border, he received a Teletype from Syracuse University offering him a scholarship for graduate school. With the encouragement of his wife, he hitched a ride out of the warzone the following day and made his way to SU. By 1973, Stith had earned an MBA and, four years later, a Ph.D. in marketing.

Luckily for us, Dr. Melvin Stith returned to his alma mater to become the 16th Dean of the Martin J. Whitman School of Management at Syracuse University in 2005. Dr. Stith recounts this opportunity as a fortunate accident. While on campus, Stith was mistaken as the new dean, when he made a visit with his son. “I’m just here to bring my son,” he had insisted as he toured the departments and visited old professors. A few weeks from that visit, the original candidate for Dean turned down the position and it was extended to Stith. With the support of his family and colleagues, Stith accepted the position and began molding the school into one focused on supporting diversity and veterans’ affairs.

The opportunity to develop the relationship between the Whitman School and the veterans community was evident when approached by the Institute of Veterans and Military Families’ (IVMF) founder, Dr. Mike Haynie. Stith needed little convincing in Haynie’s initial idea of creating an entrepreneurship boot camp for veterans with disabilities (EBV), since it so clearly fulfilled the vision of Martin J. Whitman, a veteran himself, and SU’s long historical tradition of supporting veterans. Stith recalls, “You always wish you’d have a signature program in your career, and for me, that’s it.” The EBV program and the IVMF are certainly two cornerstones of Stith’s legacy.

After nine years as the Whitman School Dean, Stith retired, though he remains active as Dean Emeritus and in The PhD Project, a national foundation that he founded and that works to recruit black, Hispanic, and American Indian students to the business school professoriate. In 2011, Stith endowed the Stith Graduate Student Fund at SU to provide financial aid to full-time minority doctoral students. The next year, Stith was invited to attend the White House Summit on Entrepreneurship for Historically Black Colleges and Universities and Minority Serving Institutions. In 2013, Stith, alongside his wife, received Syracuse University’s Orange Circle Award, which recognized their philanthropic work in the community.

Well-known in Syracuse, Stith remains dedicated to his academic, local, regional, and national communities and organizations, which include United Way, Vera House, Crouse Hospital, and The PhD Project. He also serves on the IVMF Board of Advisors, AFLAC Inc. Board of Directors, and nonprofit boards of the Jim Moran Foundation, Crouse Hospital Foundation, Syracuse Stage and his first collegiate alma mater, Norfolk State University. When asked of his greatest success, Stith said, “I think I’m a pretty good spouse, a pretty good dad, and a pretty good friend…and professionally, it’s not about being liked [though he was], it’s about being respected”—two successful deanships undoubtedly qualify.

Melvin T. Stith is an alumnus of Syracuse University and a veteran of the U.S. military. You should know his story.