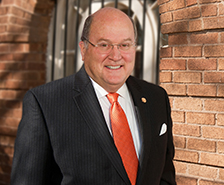 Mr. Thompson put his studies on hold, however, to serve his country as an officer in the U.S. Army Signal Corps in Vietnam. During his two years of military service, he was awarded a Bronze Star, two Army Commendation Medals, and the Vietnam Service Medal. Thompson naturally returned to graduate school, earning a law degree from Catholic University in 1975.

Thompson boasts a lengthy and successful career in both government affairs and the private sector. He served for eight years in several executive and committee staff positions in U.S. House of Representatives to include Republican staff director, chief counsel to the House Committee on Oversight and Government Reform, and minority counsel to the Subcommittee on Intergovernmental Relations and Human Resources. During his time on Capitol Hill, Thompson and his staff undertook efforts to increase government accountability through the creation of several inspector general postings across the Executive Branch and providing oversight of the FDA and the Health Care Financing Administration.

With his impressive service record and extensive experience with the pharmaceutical, food, and drug industry, Mr. Thompson transitioned to the private sector where he served as Senior Vice President of Policy and Government Affairs for Bristol-Myers Squibb. There he successfully grew a global staff of 45 people and served as the company’s senior representative to industry associations. Later, Thompson served as senior counsel for healthcare and pharmaceuticals for the public policy law firm Patton Boggs, LLP. Thompson now provides consultation services through Akin Gump in Washington, D.C.

In addition to his extensive public and private sector experience, Mr. Thompson sits on the board of several non-profit, professional, and academic institutions. Notably, he is currently the chairman of Syracuse University’s Board of Trustees as well as an advisory board member of the Institute for Veterans and Military Families. He previously served on advisory boards of the Martin J. Whitman School of Management and the Maxwell School. Demonstrating his commitment to the arts, Thompson has also served as chairman of the board of Ford’s Theatre and the governance committee for Meridian International Center, a leading cultural diplomacy center.

Richard L. Thompson, U.S. Army, is an alumnus of Syracuse University, and a veteran of the U.S. military. You should know his story.