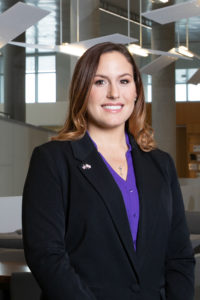 “I hope I can make my Orange family proud and honor Pat’s legacy of selfless service and leadership to make an impact during my remaining time at Syracuse University and after graduation.” – Katy Quartaro ’18, G’20.

In its third year as one of only 15 Pat Tillman Foundation University Partners, Syracuse University proudly announces Katy Quartaro ’18, G’20 as its 2019 Tillman Scholar. Quartaro is one of only 60 students nationwide to be awarded the prestigious scholarship.

“I am honored and humbled to be selected as a Tillman Scholar, and I am thrilled for the opportunity to represent Syracuse University and the Pat Tillman Foundation in the coming year and beyond,” says Quartaro. “To be a Tillman Scholar means I get to be a part of an outstanding network of some of the best and brightest future leaders in the country. I am blown away by the caliber of the men and women I will be able to connect with, and look forward to learning from them as I work toward my goal of supporting and improving American national security. I hope I can make my Orange family proud and honor Pat’s legacy of selfless service and leadership to make an impact during my remaining time at Syracuse University and after graduation.”

Quartaro joined the Marine Corps after graduating from high school in 2008. She witnessed the effectiveness of counterterrorism measures while deployed in the Southern Philippines and took advantage of numerous opportunities to experience different facets of the military police field training as a military working dog handler and conducting installation security, counterterrorism and Presidential support missions. In 2013, Quartaro became a criminal investigator for the Marine Corps. Before her honorable discharge in 2016, she conducted and assisted in over 100 criminal investigations.

Working with federal agencies like the Naval Criminal Investigative Service, United States Secret Service and the Federal Bureau of Investigation inspired her to be a part of something bigger. Quartaro enrolled at Syracuse University and completed bachelor’s degrees in forensic science and psychology in 2018. She is currently a graduate student at the University, pursuing an executive master of public administration degree with a focus on international and national security policy and a certificate of advanced study in security studies. After completing her master’s degree, she plans to work in an intelligence agency to inform national security policies.

The Tillman Scholarship honors Pat Tillman, a starting safety for the National Football League’s Arizona Cardinals, who put his football career on hold in 2002 to serve his country. Family and friends established the Pat Tillman Foundation following Tillman’s death in April 2004 while serving with the U.S. Army’s 75th Ranger Regiment in Afghanistan. The foundation invests in military veterans and their spouses through scholarship and programmatic support, and is dedicated to building a diverse community of leaders committed to service to others.

Syracuse University was selected as a Pat Tillman Foundation University Partner in 2017 for its innovative veteran services, strong culture of support for military veterans and spouses and its rigorous academic programs. The partnership closely aligns with the University’s commitment to be “the best place for veterans,” enabling recipients to apply the lessons learned in life, at Syracuse University and in the military to impact America for years to come. The next Tillman application cycle will open in February 2020.