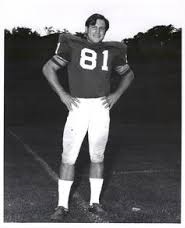 A native of Latham, N.Y., Bill Coghill was the son of Genevieve and William Coghill, who attended Shaker High School, and graduated from Deerfield Academy. Bill came to Syracuse University as a highly-touted football recruit, regarded as an All-America candidate. After earning a football letter in his sophomore year, the burly lineman departed Syracuse University for the U.S. Marine Corps, and the jungles of Vietnam.

Coghill served in Vietnam from 1968 to 1970 as a combat medic, and then returned to Syracuse and rejoined the football team for the 1970 and 1971 seasons – eventually earning a degree from Syracuse University in anthropology.

Like many Vietnam veterans, friends say that Coghill rarely spoke of his war experiences, and that he never touted the fact that he volunteered to put his college football career on hold to serve as a medic in the Marines. Bill earned two Purple Hearts during his service in Vietnam, twice suffering shrapnel injuries. The second time he was hurt, he set off a booby trap and was injured by the blast – but still managed to carry to safety a fellow soldier with severe leg injuries.  Even some of his closest friends, however, didn’t hear that story until after his death.  Similarly, many were unaware that Coghill rescued a child named Ty from a Vietnam warzone, and then had him moved from the combat area to a school – and that Coghill personally paid for the child’s schooling. Bill also fed the village children with his left over c-rations and candy he purchased, and after a while the children affectionately referred to Bill as “Kim-shee – water-boo” which roughly translates to Dr. Water Buffalo.

No, Bill didn’t speak much at all about his experiences in Vietnam.  However when he returned to school in 1970, he came to campus to register for classes wearing his Marine Corps uniform, and was asked by a newspaper reporter about his wartime experience – he said only, “Vietnam is just as bad as you see in the news and on television.”

After graduation, Coghill went on to play professional football with the British Columbia Lions, worked as a field archeologist in the Western United States and South America, and eventually returned to Albany to work with his family in the contracting business. He was a man of the outdoors, most comfortable in the Adirondacks hunting and fishing with his former Syracuse football teammates, telling stories about the years he spent as a punishing defensive tackle under legendary coach Ben Shwartzwalder.

Bill Coghill was a 6-foot-3, 230-pound defensive tackle, who put life on hold to volunteer for service in Vietnam, in the midst of his breakout season as a football player.  That is to say that Bill lived life on his own terms.

Bill Coghill is an alumnus of Syracuse University, and a veteran of the U.S. military. You should know his story.