In her Make Your Mark Talk, Tillman Scholar Katie Piston discusses her work on epigenetics, the study of the biological mechanisms that govern gene expression, and the way this field is changing our understanding of the nature vs. nurture debate. Watch her talk below and Learn about our other Tillman Scholars. 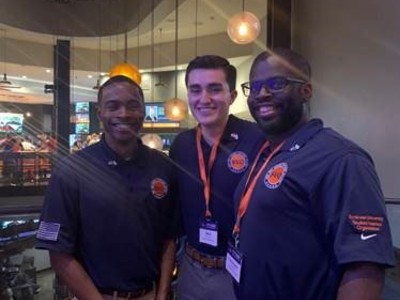 Online learning doesn’t always offer opportunities for face-to-face interaction with one’s peers. Three University College online student veterans were chosen to attend the recent Student Veterans Organization’s (SVA) National Conference in Los Angeles, and they were eager to join other student veterans for this networking and professional development opportunity. With a focus on student veteran success and post-graduation opportunities, they learned everything from landing an internship to transitioning from military to college life.

Shaei Rodriguez is in his fourth year of active duty in the Air Force, stationed at Camp Springs, Maryland. After earning an associate’s degree from the University of Maryland, he was drawn to University College’s bachelor’s degree in knowledge management, confident that it would enrich his military career.

“In the military I serve as one of my installation’s knowledge managers,” explains Rodriguez. “By majoring in knowledge management, I’m receiving schooling that goes beyond my standard training, thus enhancing my abilities as an airman.” After visiting Syracuse in July through the Warrior-Scholar Project, Rodriguez was inspired to apply to Syracuse University. 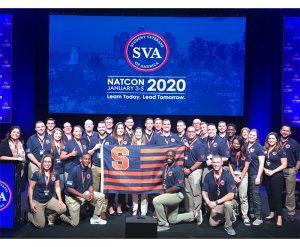 END_OF_DOCUMENT_TOKEN_TO_BE_REPLACED

“When I was talking to the recruiter, I found that they had paralegals in the Army,” says Hanna McNabb. “I had decided I wanted to one day become a lawyer, a prosecutor to be specific, and I thought being a paralegal might be a good first step on that path.”

After a year at Boise State, McNabb shipped off to basic training in May 2017 and would ultimately wind up stationed at Ft. Drum, New York, where her now-husband was stationed on active duty.

“I’m one of the few people I think that love it at Ft. Drum,” McNabb says. “It’s a small base so I’ve had a lot of great opportunities to do advance my career like Air Assault School and other courses. I also worked with a really great team so my experiences there have been pretty good so far.”

With the aspiration to one day become a lawyer, McNabb knew she couldn’t let too much time pass before she got serious about her education.

“I applied for the Army’s Green to Gold Active Duty Option,” says McNabb. The program allows active-duty soldiers to complete their baccalaureate degree or two-year graduate degree as well as earn a commission as an Army officer, owing three years of obligated service time after graduation. After a yearlong application period, McNabb was selected.

“It was a pretty competitive application process,” says McNabb. “I think nationwide they only select about 200 of us.”

With Ft. Drum being right up Interstate 81, Syracuse University landed in McNabb’s crosshairs as she needed to go to school nearby.  It wasn’t until she had been accepted however that she started doing significant research on the University.

Bethany Murphy, a senior environmental engineering major in the College of Engineering and Computer Science, has been named a 2020 Marshall Scholar. Founded in 1953, the Marshall Scholarships finance young Americans of high ability to study for a graduate degree at an institution in the United Kingdom in any field of study. Murphy was one of 46 students selected from around the country, and is Syracuse University’s third Marshall Scholar. Over the next two years, she will pursue master’s degrees at the University of Bristol and the University of Sheffield.

Below, Murphy talks about the scholarship and her experiences.

END_OF_DOCUMENT_TOKEN_TO_BE_REPLACED

Syracuse University is proud to announce The Gerald B. ’58, ‘59 and Roberta M. Faigle ‘60 Scholarship for graduate student veterans.  The gift will empower military veterans as the next generation of public and private sector leaders committed to service beyond self.

END_OF_DOCUMENT_TOKEN_TO_BE_REPLACED

It’s said a picture is worth a thousand words. For military service members who go forward into combat with a rifle and a camera, it’s more than just an adage.  Syracuse University student veteran Adrian Weekly ‘20 knows this all too well.

“I had enlisted in the Marine Corps to be an aviation mechanic,” said Weekly, a senior at the College of Visual and Performing Arts, studying Communications and Rhetorical Studies. “Then some people found out I could draw pretty well, and I was made into a combat photographer instead.”

END_OF_DOCUMENT_TOKEN_TO_BE_REPLACED

In celebration of Veterans Week 2019, the University is recognizing stories of student veterans and faculty/staff who are veterans or have especially strong connections to the military. These stories are just some of the many from the veteran and military-connected community on campus whom the University is dedicated to supporting. From welcoming veterans to campus as far back as World War I, and having the longest consecutively running ROTC program in the country, the University is committed to being the “best place for veterans.”

END_OF_DOCUMENT_TOKEN_TO_BE_REPLACED

In celebration of Veterans Week 2019, the University is recognizing stories of student veterans and faculty/staff who are veterans or have especially strong connections to the military. These stories are just some of the many from the veteran and military-connected community on campus whom the University is dedicated to supporting. From welcoming veterans to campus as far back as World War I, and having the longest consecutively running ROTC program in the country, the University is committed to being the “best place for veterans.”

END_OF_DOCUMENT_TOKEN_TO_BE_REPLACED

Every year Wick Sloane compiles a survey of the most selective U.S. Colleges totaling the number of undergraduate veterans and the initiatives those colleges are undertaking to support their veteran students. Generally, Sloane is not impressed. This year, he visited Syracuse University to discuss all the initiatives the University has to support veterans. Sloane spent two days on campus interviewing many, including Chancellor Kent Syverud, Vice-Chancellor and IVMF Executive Director Michael Haynie, and OVMA Executive Director Ron Novack.