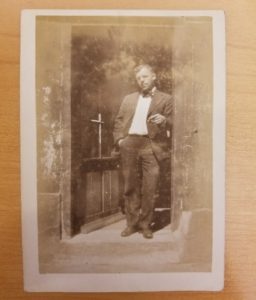 LtCol Edward S. Van Duyn, received his medical degree from Syracuse University in 1897. He established and commanded Hospital Unit G during World War I, which served troops in France with much success. Hospital Unit G served as part of Base Hospital 31 in Contrexeville, France. Following the deactivation of the hospital unit and his redepoyment in 1919, LtCol Van Duyn continued to serve the Syracuse community. He was a professor of clinical surgery at the Syracuse University Medical College. He also practiced medicine for many years and acted as the president of the board of managers of the Syracuse State Institution for the Feeble Minded.