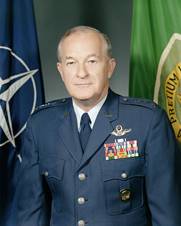 Robert Harvey Reed was born in Elkhorn City, Kentucky on October 10, 1929. Reed launched his Air Force career as an aviation cadet in 1952 at a time in our history when demand for pilots was greatly outpacing the supply.

Reed completed his initial pilot training in Arizona in 1952, which earned him a commission as a Second Lieutenant and a seat at the F-94C All-Weather Fighter-Interceptor School in Georgia the following year. His first duty station was New Castle Air Force Base in Delaware with the 332dnd Fighter-Interceptor Squadron. Over the next decade or so, Reed was assigned to several fighter squadrons at locations including Ladd AFB in Alaska, Bunker Hill AFB in Indiana, South Dakota, British Columbia, and Griffiss AFB in New York. While stationed in New York, he balanced flying F-101B Voodoo aircraft and attending Syracuse University, where he earned a bachelor’s degree in international relations in 1959.

Reed graduated from the Air War College in June 1972, following numerous assignments from California to Florida to Vietnam, logging 6,100 flying hours on seven different fighter aircraft, and completing a Master of Public Administration degree at George Washington University. Upon graduation, he was assigned to the Headquarters of the US Air Force in Washington, D.C. as Chief of the Doctrine Development Branch. There he served in a variety of key leadership roles in the Air Force before becoming the Air Force Assistant Vice Chief of Staff, subsequently, the Air Force representative for the United States Delegation to the Military Staff Committee at the United Nations. In 1986, Reed was honored with a promotion to the rank of General (four-star) and appointment as Chief of Staff for the Supreme Headquarters Allied Powers Europe (SHAPE) in the final years of the Cold War. At SHAPE, Reed led a staff of 2,800 allied officers across 16 NATO nations. General Reed retired from the Air Force in 1988 after completing 35 years of distinguished service.

Demonstrating a continued commitment to public service, Reed joined the Myrtle Beach Air Base Redevelopment Authority as vice chairman. On the topic of leadership, Reed stated, “One of the key qualities is the ability to motivate people. You have to be able to communicate and convince people of the importance of mission, and get them to buy into it. The other thing is to always operate with a sense of fairness in the treatment of people, because if you begin to show any kind of favoritism that can destabilize morale. The third thing is maintaining high standards of discipline, conduct, and ethics—you can’t compromise on those.”

General Reed has received extensive recognition for his accomplishments as an Air Force pilot and senior leader, including the Distinguished Service Medal, Legion of Merit, Distinguished Flying Cross, Meritorious Service Medal, Air Medal with 10 oak leaf clusters, and the Air Force Commendation Medal. He even has a stretch of highway named after him—the General Robert H. Reed Highway in his home state of Kentucky.

General Robert H. Reed, U.S. Air Force (ret.) is an alumnus of Syracuse University, and a veteran of the U.S. military. You should know his story.