United States Army Colonel (retired) Larry Myers was commissioned in 1942 as a field artillery officer after graduating from Purdue University’s ROTC program. One year later, Larry married the love his life, Betty Jane Mowry and together they had two daughters – Carol and Claire – and a son, Craig. Larry and Betty were married for 70 years until her passing in 2013. 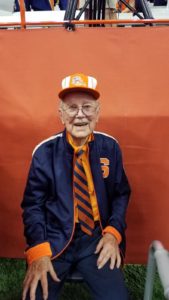 During World War II, Colonel Myers was assigned to the 591st and 590th Field Artillery Battalions of the 106th Infantry Division. He fought during the Battle of the Bulge, the Rhineland Offensive, and in the Northern Apennines, Italy. After the war, Colonel Myers was assigned to the 403rd Civil Affairs Intelligence Detachment in Mattydale, NY until his retirement in 1981 after 39 years of service.

Today, Colonel Myers is retired and lives in Syracuse, NY. He enjoys spending time with his family and three grandsons, one granddaughter, and one great-grandson. At 97 years old, Colonel Myers has been a Syracuse University football and basketball season ticket holder since 1946.