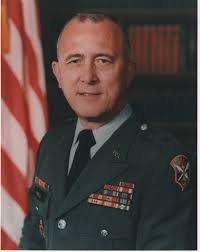 Maj. Gen. James E. Freeze, U.S. Army, (ret.) is an alumnus of Syracuse University, and also a military veteran. You should know his story, because it’s a Syracuse University story – one that speaks to our past, our present, and our future.

Growing up in rural Marengo, Iowa, James Freeze enlisted in the Army in 1949. As the Korean War showed no sign of dwindling, Freeze desired the opportunity to move up within the ranks of the Army and continued his education through the University of Maryland as part of the officer corps program. Later, Freeze graduated from Syracuse University with a Master of Business Administration degree.

Freeze served 32 years in the United States Army. He enlisted as a private and rose through the ranks to Major General. He was the first cryptologic officer to be selected for flag rank. Freeze established an impressive career contributing to intelligence operations with the Army. He led the Army Intelligence Agency and Security Command Group in a number of capacities until he ultimately retired from his role as the senor cryptologic officer for the US Army.

Today, James Freeze serves as the Chairman of the Board for Pinkerton Government Services, Inc., (“PGS”) and Paragon Systems, Inc. His military experience combined with private-sector knowledge provides Freeze with over 50 years in the intelligence, security and electronic warfare arena. Freeze rose through the ranks during a 33-year Army career. He subsequently established The Freeze Corporation, a professional services firm that provided intelligence, security and management support to government and corporate clients. Major General Freeze was honored for his admirable dedication to his work in 1987 when he was inducted into the Military Intelligence Hall of Fame.

In his spare time, James Freeze enjoys hitting the ski slopes and spending time with his wife, childhood sweetheart Dorothy Tompkins. They have two grown children and have been blessed with two grandchildren.

James E. Freeze is an alumnus of Syracuse University and a veteran of the U.S. military. You should know his story.