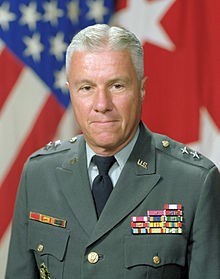 Thompson knew from a young age that he wanted to live a life in uniform. Right out of high school, Thompson enlisted in the US Navy Reserve in 1947 before entering the United States Military Academy in 1948. Four years later, Thompson graduated from West Point and was commissioned as an Army officer in 1952. From here, Thompson traveled halfway around the world to Japan, where he served with the 1st Cavalry Division. After six years in Japan, Thompson returned to the US, attending Syracuse University, where he earned two Master’s Degrees, one in Geography and another in Public Affairs in 1959. Thompson’s next assignment was back at West Point, where he joined the Department of Social Sciences for four years.

Thompson’s first assignment after leaving West Point was on the Military Assistance Advisory Group for both Cambodia and Vietnam from 1963-1965. His work on this group prompted him to reconsider his direction and enter into Military Intelligence. He went to Vietnam again in 1969 as Deputy Chief of Staff for Intelligence in the Army after having served in the Office of the Assistant Chief of Staff for Intelligence in the Pentagon for four years. During his time in Vietnam and in the Pentagon, Thompson was able to develop and refine not only his intelligence skills but his leadership style as well. The Army found both to be so successful that his assignment after returning from Vietnam in 1969 was as a member of the Vietnam Task Force in the Office of the Assistant Secretary of Defense. He later served as Chief of two successive divisions in the Office of the Deputy Chief of Staff for Personnel from 1972-1975.

Thompson’s promotion to Brigadier General in 1975 coincided with his transfer to the US Army Intelligence Agency at Fort Meade in Maryland, where he was the commanding officer for two years. Two years later, in 1977, he was promoted to Major General and began a four-year assignment as the Assistant Chief of Staff for Intelligence (ACSI). In this position, Thompson played a large role in reforming parts of the Army intelligence community, from implementing RED TRAIN across the Army to forming the US Army Intelligence and Security Command. His tenure as ACSI was a huge success for him and the Army as a whole. Thompson’s last post was at the Defense Intelligence Agency, where he served as the Assistant Director for Special Cooperation and the Deputy Director for Management and Operations before his retirement in 1984.

Thompson’s recognitions from the Army help highlight his illustrious career in Army intelligence. He was awarded, among many decorations, the Distinguished Service Medal with an oak leaf cluster, National Intelligence Distinguished Service Award, the Defense Superior Service Medal, and the Legion of Merit with an oak leaf cluster. Thompson was also recognized as one of the original distinguished members of the MI Corps in 1987.

Major General Edmund R. Thompson is an alumnus of Syracuse University, and a veteran of the U.S. military. You should know his story.