The Student Veterans Organization (SVO) and the Office of Veteran and Military Affairs (OVMA) have presented two awards to student veterans in honor of their significant and notable achievements. The awards were distributed at SVO’s social held at the Inn Complete on South Campus on May 6. 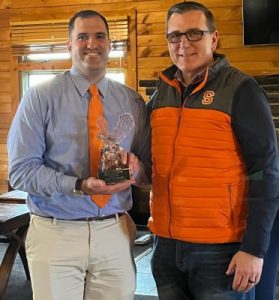 OVMA takes pride in student-veteran involvement on campus, in the community, and at various events on and off campus. Each year, OVMA Student Veteran of the Year is presented to a student who has gone above and beyond, with contributions on and off campus, to make Syracuse University “the best place for veterans.” This year’s recipient, Ryan Marquette L’22, a U.S. Army veteran and active member of the Army National Guard, set a new precedent of success for a student veteran. 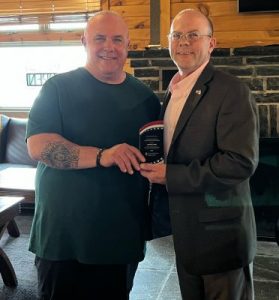 Danny Facto, the University’s first Veterans Affairs (VA) work-study participant, recognizes a student veteran VA work-study who reflects the values that Danny did during his time on the hill. Danny was an excellent ambassador of his fellow student veterans and through an unwavering commitment made tremendous impacts on those who surrounded him during his life. This year’s recipient, David Ladd ‘23, exemplifies the values set forth by Danny. As described by his nominator, David has the passion, commitment and ability to get things done. Those qualities are the very same used to describe Danny.

Read more about Marquette and Ladd