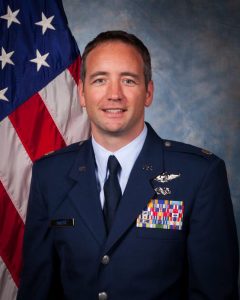 Lieutenant Colonel Sheets is the Commander, Air Force Reserve Officer Training Corps (AFROTC), Detachment 535, and Chair, Department of Aerospace Studies, Syracuse University. As Commander, Lt Col Sheets is responsible for developing AFROTC cadets to become the best Air Force leaders and citizens of character dedicated to serving our Nation. As Chair of the Department of Aerospace Studies, he collaborates and coordinates with university leadership and 12 cross-town colleges to ensure program and student advancement.

Lt Col Sheets commissioned in 2005 as a distinguished graduate from Virginia Tech ROTC Det 875. He is a joint qualified officer and senior special operations pilot with deployments to Europe, the Middle East, Southeast Asia, and Africa. Prior to his current position, he was assigned as an Operations Officer to Deputy Director for Special Operations on the Joint Staff and also served a year as the Director of Operations for the Defense Innovation Board in the Office of Secretary of Defense.