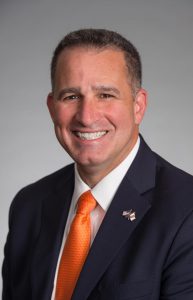 As a high school senior, University College Dean Mike Frasciello’s guidance counselor warned him that he wasn’t cut out for college. His first semester as a college student at a small liberal arts school didn’t go as well as a result. He ended up leaving college with a 1.8 GPA after two semesters. He enlisted in the U.S. Air Force a few months later. Frasciello says the decision to serve changed his trajectory and completely transformed him. “More than anything else I’ve done professionally, my service and training in the Air Force still informs my decision making,” says Frasciello.

Frasciello served on active duty for 10 years. He says he was fortunate to be assigned to squadrons that valued developing junior enlisted airmen into future leaders. “I was actively encouraged to take advantage of leadership development programs, pathways, and opportunities,” he says.

Frasciello worked as an airman during the day and took college courses at night and on weekends. His dedication allowed him to finish three degrees. Twenty years after leaving the Air Force, Frasciello completed a Ph.D. while working full-time. Today he serves as dean of University College, Syracuse University’s gateway for part-time students whose goal is to pursue a degree or earn a certificate or credential from any of the University’s schools and colleges. “So maybe college was for me,” he says.