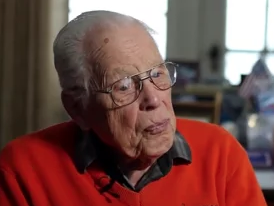 Lieutenant Donald R Waful ’37, G’39 kept a journal during part of the “3 Christmases and 3 birthdays” he spent behind enemy lines.  Captured by the German army and held captive from 1942-44, Waful recorded details of daily life, diversions the prisoners employed to pass the time, and his burgeoning love for Cassie, the enlisted nurse he’d become engaged to weeks before his capture.

The journals, narrated by Brett Barry ’98, G13, tell just part of the story: four interview sessions conducted between 2018-19 gave Waful, then 103 years old, a chance to fill in gaps (such as his thrilling escape and the subsequent search for Cassie), and reminisce on his experience 75 years after the war’s end.

The OVMA encourages you to listen to the incredible journals and reflect on the sacrifices made by those during WWII.

Listen To The Journals